I attended my second Abaqus Regional User Meeting (RUM) last month and really enjoyed it. Did I understand it all; well honestly no, but I suspect that I wasn’t alone in that.

If you haven’t been to one before then I strongly recommend it. It may perceived as a 2 day jolly by certain management factions, and it certainly isn’t without its enjoyable moments, but there is huge professional and technical value to be had from a RUM. The fact that this was the 27th backs that up.

Throughout the 2 day conference there were plenty of papers presented.  Seeing Bob Johnson is always a joy, but Bob looked more nervous than usual and when I spoke to him at the first morning’s coffee break.  Apparently everything was great up to Thursday morning, at which point his customer withdrew its permission to use its models in his talk.  All I can say is that Bob did not disappoint with his presentation later that day.  (Although it’s a shame nobody forced him to withdraw the slides showing how he ran the London Marathon dressed as Freddy Mercury.) - Rod Giles’ keynote speech on Abaqus and how it is used at Triumph motor cycles.  This was exciting, especially as the somewhat extreme physical tests were compared with simulation. It’s a shame we can’t share the presentation.

- David Winfield’s paper on their Deep sea Pipeline clamping system which he had also presented at the SCC (World Simulia Customer Conference) earlier this year in Rhode Island.

- Ian Hannah’s work on ‘Using topology optimisation to generate personalised athletic footwear midsoles’. I have quite a long standing interest in this from my short-lived sporting career.

- Mark Stephenson’s paper on ‘Crack Prediction and Subsequent Simulation Driven Redesign of an Exhaust Manifold’ was really interesting and did create some conversations at the bar later that night. In fact Mark won the Rob Lacey award for his paper, which was well deserved.

The round table sessions which gave you the opportunity to discuss areas of interest with both the Warrington technical team and visitors from HQ were great.  Simulia’s Vice President of Worldwide Operations, Roger Keene and key developer Juan Hurtado were both present and taking a range of questions from users.

Beer is always welcome after a full packed day at a conference and the evening’s entertainment was really no surprise. If you have a room full of engineers then you have to set an engineering challenge, it’s the unwritten rule, certainly at the RUM. Each table was given various materials and an egg. The aim was to create a structure to protect the egg when the whole assembly was dropped from a height. The highest won.  With PhD and experienced engineering minds thrashing out design ideas, I wouldn’t be surprised if a few hand calcs on serviettes along the way weren’t done. For me, my solution was simple; go to the bar enjoy a San Miguel while my egg was hard boiling! Unfortunately my entry was disqualified as I did not have time to cool the egg so was found out when inspected by the judges. Although it passed all the tests.

If you haven’t been to a RUM then I really urge you to try and attend next year. It’s a great conference.  For me, whose FEA career journey has just begun, the opportunity to mix with a whole room of people at the top of their game was fantastic; for the more experienced people at work it seemed to be as useful and enjoyable.  See you at UK RUM 28! 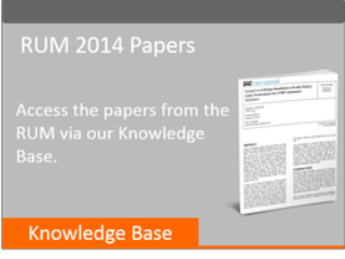