Develop3D Live; another opportunity to talk about Simulation, FEA, Design, and why plastics make life difficult...

Develop3D Live, for the third time now, found me pushing my usual Design by Simulation message.  Less familiar was to find other people joining in.

Rather than a technical focus this year I thought that I’d concentrate on looking at why growth in the simulation market seems to be largely confined to the higher reaches of the engineering pecking order.  So for the record my presentation went something like this…  Intro, where is the growth in the market, its at the top, what is simulation anyway, its anything you use which uses numbers and physics to predict what will happen to your design, why do we do it, to see if what we designed will work, what things will work, and whether what we make will work, if its all so great why don’t more people do it, because their first goes aren’t successful and they don’t know why, plastics, difficult to model, how does anyone ever get the right answers when they use simple material representations, what do we get from a sensible simulation implementation, knowledge and the need to learn more science.

Pretty much the usual stuff.  Not usual was that a speaker before me, Mark Sanders, a man with much impressive work to show, made some similar points; mainly in his case with respect to the relationship between design and engineering, designers and engineers.

So I’m not just a lone voice. You need to embrace the science to make simulation work. If you are designing for any form of function, that function is driven by physics, and describing that physics is critical to the design process. Understand the science, and the simulation process pretty much falls into place. Years ago I realised that nobody who had previously been designing using physics and mathematics had failed to grasp simulation on a training course. (The flip side of this was somebody who thought the simulation code would make the component look more rugged.. “it just doesn’t say rugged to me” he said when we redesigned his component to eliminate the stress raisers.. “I thought it would add some boiler plate type effects to make it look tougher, like manga?”)

On technical thing I did focus on, given that D3DLive is essentially a show for industrial designers, was the problem of modeling polymeric materials, especially when used in applications such as snap fits and assembly processes. This whole area is one which illustrates the point I’m making very well. The physics is A-Level, I know that because I looked through my sons revision notes about a week ago, and they covered modulus, stress, strain, and critically elastic and plastic deformation. So anyone in design should be able to understand that level of engineering technology, and be able to appreciate that defining a single modulus for a plastic material won’t go too far when it comes to modeling plastic parts which are loaded to within a reasonable percentage of their failure load.  Its one thing missing this first time around the simulate, test, simulate design loop, but it should be picked up once the validation process is carried out.  Which was the main thrust of what I was saying; that whatever you do the learning process and hence the development of IP is driven by continued looping around the simulate test loop.  And if you don’t appreciate that you won’t make design by simulation work and it won’t drive creativity like it should.  And there sits a great big problem.  If you look on the web, the material libraries of CAD Integrated simulation codes, and lots of other places hugely simplified representations of polymer material response data are given. Build your models using this information and you won’t get the answer anywhere near right if you approach the limiting loads of the component.  (There is an argument that says that even plastics suppliers don’t go far enough by supplying stress/strain curves in a world that has some companies using complex approaches like the Abaqus parallel rheological framework.)

So that was that, another opportunity to preach the SSA line on simulation, a chance meeting which showed that I’m not the only person to think like I do, and a pretty good audience for my talk, some of whom even asked questions. Sensible ones. Not a bad day. 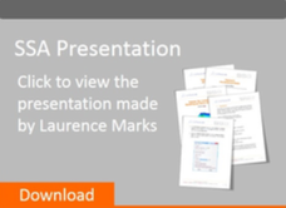